The SLFP rebel group of 16 who quit the ‘Unity Government’ after supporting the No Faith Motion against the Prime Minister did not raise a mummer about sitting in the Opposition as an independent SLFP group in Parliament from May 8 onwards, Ports and Shipping Minister Mahinda Samarasinghe said.

Minister Samarasinghe said the final decision of the Central Committee that met at the official residence of President Sirisena on Tuesday (24) night despite their widely publicized grandiloquence to that effect, all 39 were to continue to sit as members of the SLFP Parliamentary Group under him.

Addressing the SLFP weekly news briefing at the party office yesterday, Minister Samarasinghe added that all other 23 members of the SLFP would fight for the benefit of the 16 rebels and keep them within the SLFP’s Parliamentary Group as one unit.

There were several rounds of talks with President Sirisena on Tuesday afternoon and eight former Cabinet Ministers met him first after the Cabinet meeting followed by 16 Ministers, State and Deputy Ministers at 5.00 p.m. Then after at 7.00 p.m. the entire SLFP Parliamentary group of 39 members met him and at 8.00 p.m the CC met.

The focus was on the reorganization of the party, the May Day rally and how to strengthen the SLFP to face the forthcoming Provincial Councils, Presidential and Parliamentary polls, Minister Samarasinge said.

Responding to Daily Mirror he said the impending Cabinet reshuffle or sitting as an independent group in Parliament by the rebel SLFP group of 16 Cabinet, State and deputy Ministers were not taken up for discussion at the CC.

However, Minister Samarasinghe added that if the Cabinet reshuffle comes sooner than later, it was good for the country and the ‘Yahapalana Government’ as it would dispel the uncertainty prevailing in the governance. He hoped that the Cabinet reshuffle would come in the next few days if not by next week. (Sandun A Jayasekera) 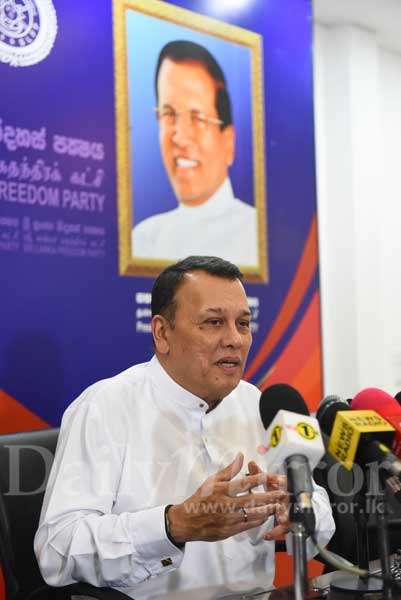