Abduction and torture of Tamils by the Sri Lankan security forces remain systematic because in 30 months the new Government has failed to dismantle the networks of the ‘deep state’, a Johannesburg-based, the International Truth and Justice Project (ITJP) said in its latest report.

This includes torture chambers in one of the country’s largest army camps, immigration fraud, human smuggling and extortion by government allies, the report stated.

“It is hardly surprising that Sri Lanka’s white van abductions continue as those in charge of past system crimes have been promoted and rewarded by this Government, which reassures perpetrators that they will never be held accountable,” said the ITJP’s Executive Director, Yasmin Sooka. “In addition, torturing Tamils has become a highly lucrative business,” she added.

The ITJP comprises prosecutors and lawyers who’ve worked on international tribunals, UN commissions and the ICC. Its findings are reinforced by medical NGOs and doctors who do painstaking work forensically examining the scars of torture survivors.

For its latest report the ITJP took detailed testimony from 57 Tamil victims of illegal detention and torture under the Sirisena government — 24 of them tortured in 2016 or 2017. No official has been investigated or held accountable for such torture.

The ITJP’s report, “Unstopped”, indicates that the ongoing torture is not the conduct of a few “rotten apples” in the Sri Lankan security forces as it includes senior officers who themselves participate in the torture which is systematic and condoned

The ITJP’s report provides graphic descriptions of the torture methods used in 2016/17, which include beating with cricket wickets and pipes, burning with cigarettes and branding with hot metal rods, asphixiation and hanging upside down. In addition, 18 victims (15 male) described experiencing sexual violence.

“It’s hard to convey the extent of the sexual depravity and cruelty of the perpetrators,” said Ms Sooka, “what’s clear is any security sector reform in Sri Lanka must ensure that officials responsible for these grave crimes are held criminally accountable”.

– In a third of cases in 2016/17 senior officers are described entering the torture chamber, indicating knowledge on the part of those in command.

– 12 victims in 2016/17 heard other prisoners screaming from their solitary cells, indicating

(a) More people were tortured and

(b) All the security personel present at the site would have had knowledge of the torture.

– Biometric fingerprinting has been used in the torture chambers, technology that was only recently introduced for passports. Organised crime would be unlikely to use this or want to fingerprint in the first place.

– Victims describe being asked questions about information given during previous interrogations that was not widely known, indicating those involved in torture now have access to a centralised database of past interrogation records.

– 8 victims describe some of their perpetrators wearing military uniforms.

– In 7 cases the victim was tortured in a known site – the Vanni Security Force Headquarters (also known as Joseph Camp).

– Victims are held in purpose built cells and tortured in rooms already equipped for torture.

– The abductions, release and detentions follow a similar modus operandi as during the Rajapaksa years.

– Reprisals continue against family members after the victim has fled. 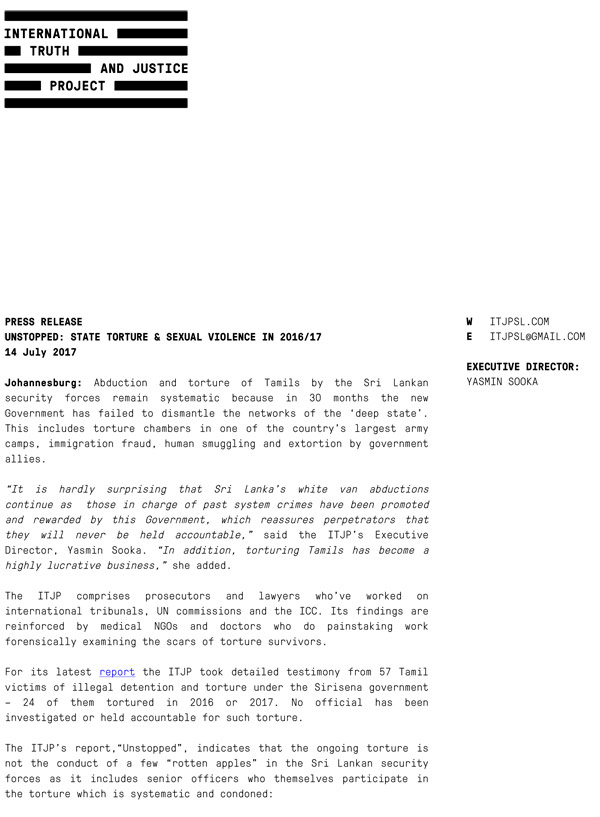 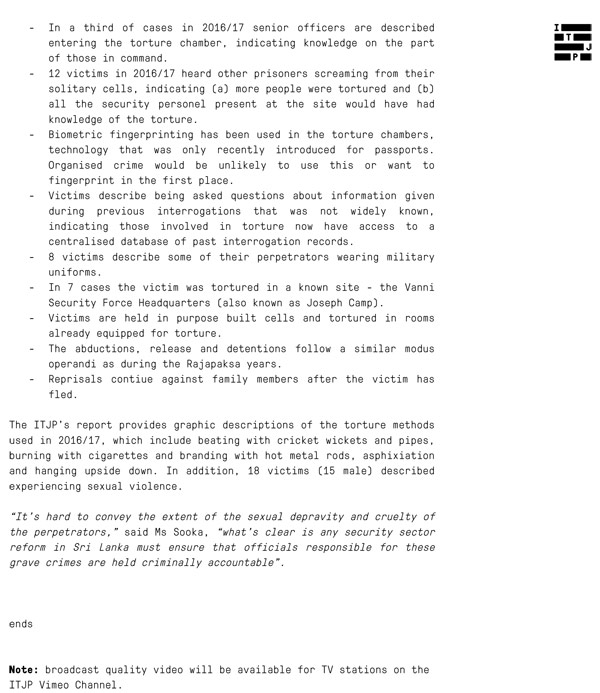