The Police today published sketches of two individuals to help identify suspects wanted in connection with the shooting incident where a Police officer was killed and several others were injured, when two gunmen opened fire in Piliyandala on May 9.

The Police suspect that the suspects in the sketches had arrived on the motorcycle to carry out the shooting.

They said that investigations had revealed that the suspects had purchased the motorcycle from Delgoda on the same day.

They said the IGP had made arrangements to award cash reward for accurate information on the suspects’ whereabouts.

Four civilians, including three children were also injured in the shootout. They were admitted to the Kalubowila Teaching Hospital.

The motorcycle used by the suspects to flee the scene was later found abandoned in Maharagama.(Darshana Sanjeewa) 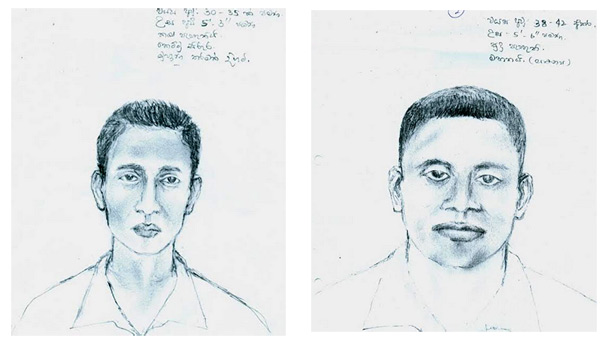