Sri Lankan asylum seekers living in Hong Kong fear they are being illegally pursued by police after sheltering the US whistleblower Edward Snowden in the city.

Criminal investigators from Sri Lanka are believed to have visited Hong Kong looking for them, their lawyer said.

The Sri Lankan police have denied the allegations.

Law enforcement authorities from mainland China or other countries have no jurisdiction in Hong Kong.

The lawyer representing the men, Robert Tibbo, said that at least two officers from the Criminal Investigation Department (CID) of the Sri Lanka police visited Hong Kong in December looking for them.

“We have become aware of Sri Lankan police taking active steps to locate my clients,” he said, adding: “They identified themselves to members of the Sri Lankan community in Hong Kong. They carried photographs and files.”

Sri Lankan police spokesman Priyantha Jayakodi said the allegation was “a complete lie”.
“We have not done any investigation in Hong Kong or any other country on any refugee case,” he told BBC Sinhala. 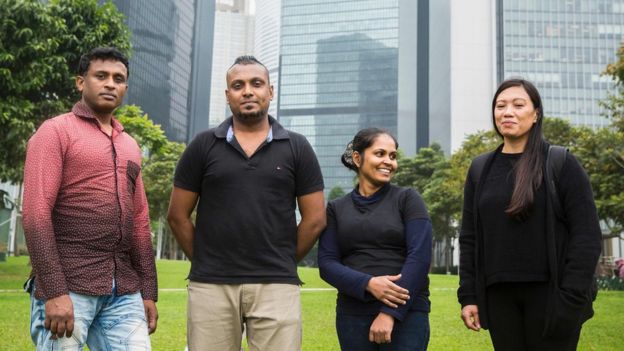 However Mr Tibbo said the evidence came from Sri Lankans living in Hong Kong who were approached on the street in late December by people who carried official identification.

His clients fed and housed Mr Snowden for two weeks in June 2013 when he fled the US after leaking thousands of documents belonging to the US National Security Agency (NSA).

The former IT contractor subsequently left Hong Kong for Moscow.

The names of the asylum seekers, Kellapatha Supun Thilina and Debagma Kankanalamage Ajith Pushpa Kumara, were revealed last year by Mr Tibbo, ahead of the September premiere of the film Snowden by the director Oliver Stone.

He said that it would have been difficult to keep their identities secret after the film's release.
Mr Tibbo believes the Sri Lankan government began investigating the asylum seekers shortly afterwards.

The lawyer says Sri Lankan officials may have noted the disappearances of the Causeway Bay booksellers and the Chinese billionaire Xiao Jianhua – who some fear may have been forcibly taken from Hong Kong to mainland China.

“With the Hong Kong government not holding Beijing accountable, and the lack of transparency, this amounts to an invitation to other governments in the world,” Mr Tibbo said.

“That their security forces, their police officers are welcome to come into Hong Kong and investigate and do similar things,” he added.

Two local lawmakers, Charles Mok and James To, have called for an investigation.

“I am very concerned about this case,” said Mr To, a member of the pro-democracy Democratic Party.
“Nobody can come and enforce the law in Hong Kong except Hong Kong officials. Nobody can come in breach of Hong Kong law.”

The asylum seekers have since moved to “safer” locations and have notified Hong Kong's immigration department.

They also plan to file a police report.

Mr Thilina, who arrived in Hong Kong in 2005, said he was frightened by the news.

“I am nervous and scared. I don't have a normal life now,” he said.

His compatriot, Mr Kumara, an army deserter who served as an informal bodyguard to Mr Snowden in 2013, was also worried for his safety.

They are concerned about the prospect of being removed from Hong Kong and forcibly returned to Sri Lanka, where they say they could face violence and torture.

Mr Tibbo represents both men, along with Mr Snowden and Vanessa Rodel, an asylum seeker from the Philippines who also gave refuge to the US whistleblower in Hong Kong.

Hong Kong currently has about 10,000 asylum seekers, mainly from countries in South Asia and Africa.(BBC)