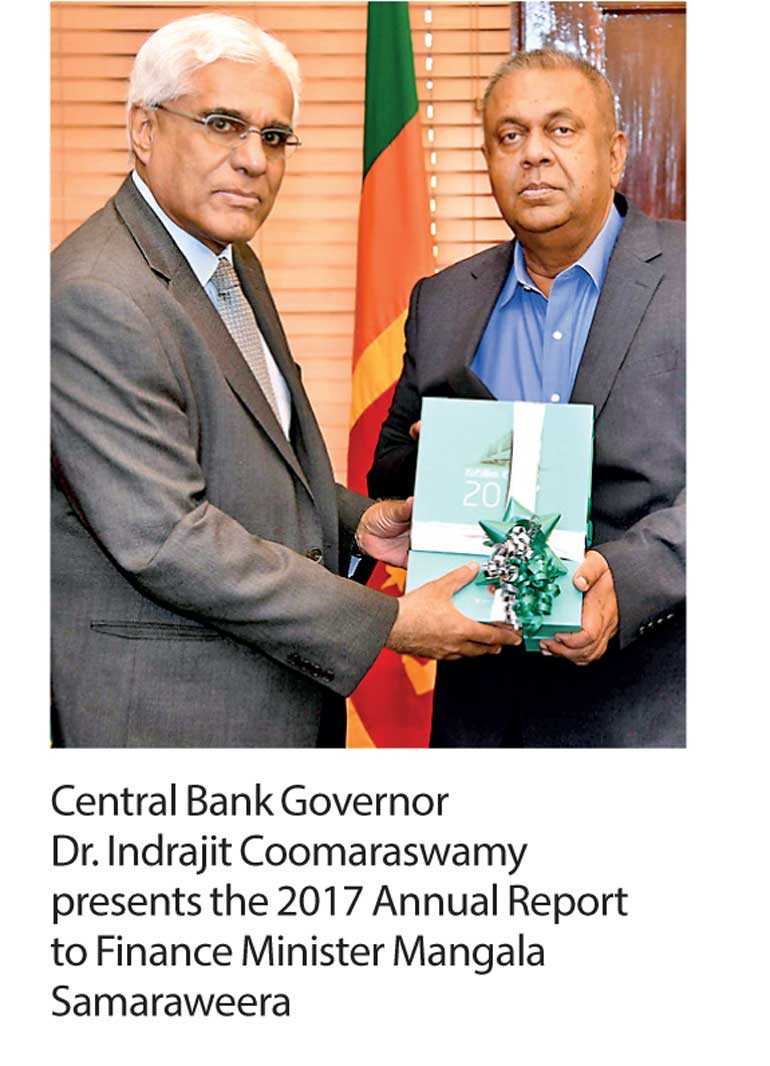 The Central Bank yesterday staunchly defended its flexible exchange rate policy despite the recent steep depreciation of the rupee, insisting that it was dedicated to maintaining a “fair value” and is ready to intervene in the currency market if necessary.

Both Central Bank Governor Dr. Indrajit Coomaraswamy and Deputy Governor Dr. Nandalal Weerasinghe backed the Central Bank’s non-intervention policy in the currency market and extensively laid out their reasons for allowing the exchange rate to be flexible.

They insisted that as the Central Bank had built sufficient reserves, hitting a historic high of nearly $ 10 billion this week, it has the capacity to intervene in the market if the need arises. However, both officials were adamant that the current rate of the rupee remains competitive and emphasised that the Central Bank stands ready to adjust monetary policy if inflation becomes a concern.

“There is no reason for the rupee to be under pressure. Even if it does come under pressure we have the firepower to ensure that the currency maintains its fair value. We no longer target a specific exchange rate, our target is on inflation. But as we are a heavily indebted country we need to use our exports to get out of the foreign debt problem.

It is important to have a competitive currency. As a rule of thumb we would like the real effective exchange rate to be 100, at the moment it’s slightly under so the currency is slightly undervalued. We are providing a competitive currency to meet the Government’s goals of exports and FDI,” Dr. Coomaraswamy told reporters during the launch of the bank’s Annual Report for 2017.

Dr. Weerasinghe also pointed out that several other countries including India, the Philippines, Indonesia and Australia have seen their respective currencies depreciate over the past few months. Sri Lanka’s currency by contrast only depreciated 2% last year and he explained that the present slump in the exchange rate was largely seasonal as the festive season had pushed up consumption and driven up imports, leading to a higher than usual demand for dollars in the currency market.

“We generally see more demand during this time. Under a flexible exchange rate policy there is more volatility because there is no Central Bank intervention. We stand ready to intervene if necessary but we also need to take into consideration external factors before doing so,” said Dr. Weerasinghe.

Dr. Coomaraswamy concurred with his colleague, pointing out that managing external debt was a priority for the Central Bank, especially since inflation was seen to be under control. He pointed out that if the Central Bank protected the rupee by depreciating reserves, international financial markets would notice and the Government could face higher interest rates when it returns to the market to buy more dollars for debt servicing. Sri Lanka has to repay about $ 3.8 billion annually from next year till 2022.

“We have to keep in mind how much more dangerous external debt is. If you cannot meet your obligations on the external debt side and people get concerned they won’t lend money and you have to have dollars to repay dollars. If we cannot maintain reserves then we have to dramatically cut imports. That’s what happened to Greece. Cutting imports, or austerity, has a devastating effect on people.”

At the same time the Central Bank was able to purchase $ 1.6 billion to shore up non-debt creating reserves. Reserves increased in volume and quality as the short-term swaps with commercial banks were reduced from $ 2.5 billion to $ 1.5 billion, the Governor said. Reserves would continue to be strengthened by the $ 1 billion bond opened this week, which could be expanded and about $ 600 million from the last tranche of the Hambantota port lease.

“As of today reserves are at a historic $ 9.91 billion but we shouldn’t be banging too many drums because quite a lot of this is due to borrowings. We will continue to reduce short-term swaps by at least another $ 800 million this year. The Central Bank will also continue to buy reserves and has so far bought about $ 450 million.”

“It is a myth to say that when you depreciate the rupee your external debt liabilities become aggravated. Governments borrow in foreign exchange and they pay in foreign exchange. When the borrowing occurs for accounting purposes it is recorded in rupees and when you depreciate the currency that amount does increase but you pay back out of inflows into the country,” he added.

The Governor was also upbeat on the macroeconomic front. Elaborating on the Annual Report, which was launched on Thursday, Dr. Coomaraswamy called on the Government to stick to its fiscal consolidation process, improve policy consistency and fast-track reforms.

“All in all, on the stabilisation front, inflation is under control. The underlying factors on the monetary side are where we want them to be including board money growth and private sector credit. Inflation expectations seem pretty well-anchored. We don’t see any major wage pressure. The current account should adjust down to about 2.1% of GDP. Last year we had record exports and FDI and there has been a reasonably good start on those fronts this year as well.

“Where the outcomes are not as positive as we would like them to be is on growth. We think the potential growth rate is about 5.75%, but growth was only 3.1% last year, so clearly there is an output gap, which is why the Monetary Board signalled the end of its tightening phase recently. We need domestic and international investment to pick up, we need good quality growth but this growth needs to be driven by reforms not by an undue relaxation of fiscal and monetary policies, which result in an overheating of the economy.”

The Governor renewed his warning against policy swings for political gain, acknowledging that this remained a concern.

The fiscal side is broadly on track and the overall Budget deficit was larger than the target primarily due to drought relief but despite that a couple of significant structural changes have been achieved such as a primary surplus and VAT reforms.

Revenue enhancement will continue and that is crucial. I’m sure there will be political pressure to undermine the framework but it is very important that this fiscal consolidation continues and the progress the Government has made is reflected in the recent Staff Level agreement with the IMF on the fourth review of the Extended Fund Facility (EFF).”

“There were some dollar conversions by exporters. But the demand was high from importers and also some foreigners selling Government securities,” a currency dealer said.

Some dealers said dollar purchases by oil importers, who usually buy dollars from banks, weighed on the currency.

The International Monetary Fund said last week that the Central Bank should continue to remain vigilant in guarding against inflationary pressures, “while continuing to build reserves and supporting greater exchange rate flexibility”.

Dealers said they expect the rupee to gradually weaken and face higher volatility this year due to debt repayments by the Government.