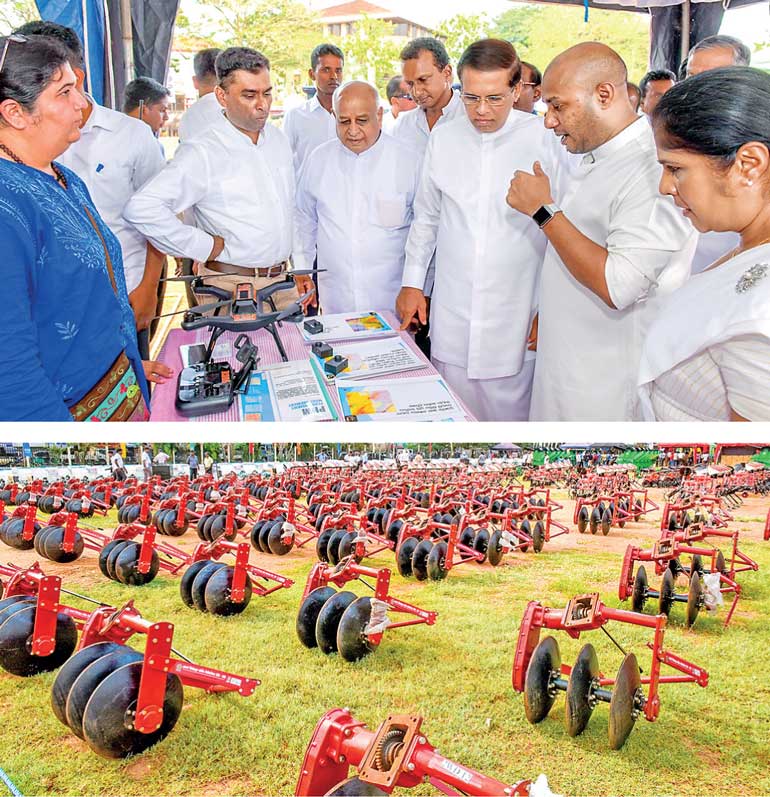 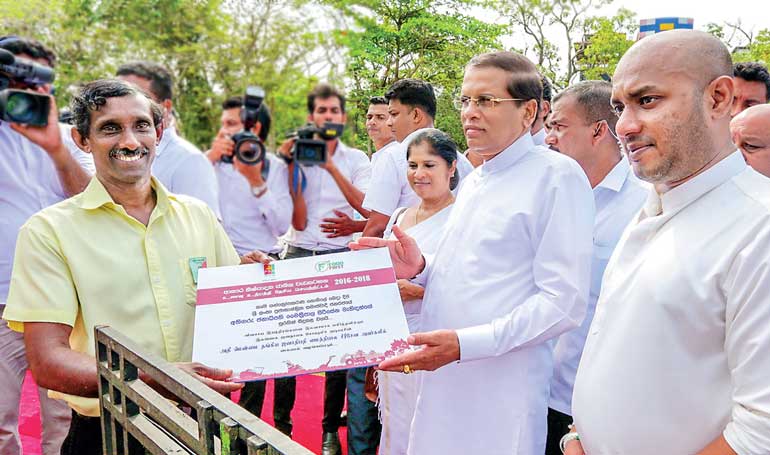 President Maithripala Sirisena says that youth of the country have been empowered to get connected with the export trade using the mobile phone and internet, at present, instead of mere traditional agriculture.

He said that a complete array of organisations is in the operation to provide loan facilities and guidance for them to embark such initiatives and give a new facelift to the traditional agriculture.

The President made these remarks speaking at the event which was organised to provide agricultural equipment to the farmer organisations free of charge in line with the National Food Production Program. The event took place at the public grounds, Anuradhapura on 8 April. As an initial step of promoting modern technology in the agriculture field, the new equipment was distributed among the farmers who represented all the provinces of the country.

The President elaborated that it is compulsory to equip the farming communities with the cutting edge technology to improve the country’s agriculture and achieve the development goals of the country; the Government has devised a plan to fulfil the goals.

The President also said that the future development goals can only be achieved through implementing the program to develop the agricultural sector. He recalled the Api Wawamu – Rata Nagamu (Let us Grow – Raise the Country) project which was implemented during his tenure as the Minister of Agriculture based on the concept of himself; that helped to encounter the food crisis successfully.

The President also reminded that during the campaign of the local government election of 2013, many promises were given to provide relief to the drought hit people at the public rallies and media outlets with full page paper advertisements under the guidance of then leaders and no promise was redeemed following the election campaign.

The President said that the current government is implementing a well-devised plan to provide relief to the victims of the recent drought and it is the most comprehensive relief package that was ever granted to the drought victims.

While responding to the allegations that though a son of a farmer has ascended to power, no service has been rendered to the farmers, the President said that he has a first-hand experience on agriculture and the farming communities and a proper plan is underway to connect the farmers to state-of-art technology and creating a generation of farmers who entertain strong economic background and are rid of debt burden.

A string of programs for example, providing remittances to farmer organisations, presenting long service awards to the employees of the Institute of Post Harvest Technology, presenting certificates to the beneficiaries of the training programs conducted by the Institute of Post Harvest Technology, distributing equipment to manufacturer organic fertiliser, providing loan instalments of ‘Sara Lanka’ program was held under the aegis of the President.