The launch of the Institute of Policy Studies’ annual State of the Economy (SOE) report on Tuesday triggered a healthy debate on the problematic issue of whether Sri Lanka was suffering due to political reforms taking precedence over economic matters and which was more important.

The IPS 2017 SOE called for Sri Lanka to urgently address structural constraints through a process of reforms if the country was to raise its medium-term growth prospects. 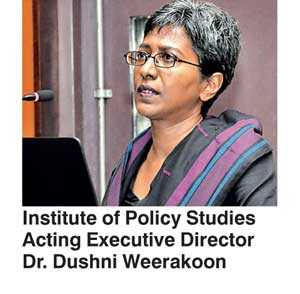 It stressed that the implementation of reforms will depend on persuading government coalition partners that economic reform initiatives are designed with sufficient reference to the concerns of ordinary voters.

“If political indecision makes a reform effort less achievable, the evidence will begin to confirm that the probability of a sustained upswing for the Sri Lankan economy is dim. In view of the daunting medium-term debt financing challenges that Sri Lanka must prepare to meet, the country cannot afford to lose this opportunity to put its economic house in order,” the IPS said.

However, National Policies and Economic Affairs Deputy Minster Dr. Harsha de Silva, who was the Chief Guest at the launch of the report, noted that whilst economic reforms are important and being pursued, the need and urgency for political reforms was greater, especially in the context of the mandate given by the people at the 8 January 2015 Presidential Election followed by the General Elections in August of the same year.

“Yes, economic reforms are essential and must be done but political reforms giving people the rights they deserve in a democracy are perhaps equally or even more important,” argued Dr. de Silva. Extricating Sri Lanka as a sovereign nation with the global community is important for a Government, as a nation, he added.

“We must have the backbone as a Government to deal with what happened in the past. Nothing is important as much as ensuring winning the peace in the country. Perhaps  we will grow at a slower pace, say 4%, but if that gives us the opportunity to ensure that once and for all we are able to bring in the political reforms that the whole world is asking us to do, including local society, then I think it (4% growth) is worth it,” emphasised the Deputy Minister.

He suggested that the Government could take steps for 8% growth next year by saying constitutional reforms were unnecessary but that would be foolish.

“When people talk of reforms, they get carried away that it’s only economic reforms. The economy cannot stand on its own. It is interconnected to democracy, peace and reconciliation,” he pointed out.

“When people ask me why we have been slow on reforms, I explain reforms are not only economic but also of other types such as political reforms and foreign policy reforms to extricate the country from the difficult position it was in. Some have forgotten that had Sri Lanka gone down the path of the previous regime, by today Sri Lanka would have been slapped with economic sanctions, and hauled to the International Criminal Court for crimes against humanity,” he said.

“As a democratic Government we had to deal with the urgent issues of that time, engage in political, foreign policy reforms, give greater freedom by amending the Constitution, re-established the independence of administrative structures. Some blamed the Government for corruption, but I must emphasise that corruption did exist before but was never exposed or there was no mechanism to prosecute people.”

Referring to anti-SAITM protests, he said that some people were against non-state education even if it met the minimum standards that are required. “In the past people didn’t protest and if they did, brute force was used against them. Today there are many protests. That is the consumption of democracy created by the current Government. Of course protestors during the previous regime were not slapped but got shot,” recalled the Deputy Minister.

Amidst these seemingly opposing views some sense of rationality was brought in by former Central Bank Deputy Governor and Daily FT’s weekly columnist W.A. Wijewardene, who provided a review of the IPS SOE 2017.

He said there was an urgent need for the Government to tackle both political and economic reforms simultaneously rather than only the former.

“Policy prescription (from the IPS report) is for the long term and the Government concentrating on the short-term election cycle should not ignore it. The Government should have a program to harmonise sound economics and political expedience,” said Wijewardene.

According to IPS, a primary constraint on growth was identified as the nation’s inadequate human resource pool of professional and technical skills and called for improvement in labour market efficiency by tackling two of the biggest limitations – its stringent employment protection laws and low female labour force participation rates. In his observations, Wijewardene too agreed that Sri Lanka’s thrust toward prosperity depends on how it could “de-skill and re-skill” its “irrational stock of labour”.